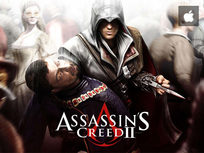 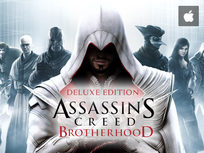 Become A Master Assassin On The Streets Of Renaissance Italy

Disclaimer: To access and download these games, you must first download the Mac Game Store client onto your Mac. Upon purchase, your redemption instructions will explain this (very simple) process.

The epic sequel to the fastest-selling new series in video game history. Step into the boots of Ezio Auditore da Firenze, a young Italian noble, in a new era, the Renaissance. Follow this epic tale of family, vengeance and conspiracy set in the pristine, yet brutal, backdrop of a Renaissance Italy; befriending Leonardo da Vinci, taking on Florence’s most powerful families and venturing throughout the canals of Venice as you become a master assassin. Assassin’s Creed 2 Deluxe Edition includes Assassins Creed 2 and three special in-game maps of prestigious Renaissance monuments: Palazzo Medici, Santa Maria Dei Frari, and the Arsenal Shipyard.

WHY WE LOVE IT

The free-flowing, ninja-style parkour and open-world environment made famous by the first title return here; and with new locales, weapons, and ways to kill, you won't want to stop playing. TOP FEATURES

*Metacritic Score: 91/100* "This is one case where the sequel has triumphed over the original by catching the gameplay up to the already excellent visuals. No matter what your preconceptions are about Assassin's Creed II, the game is well worth your time and money." (8.9/10) - IGN "... Assassin's Creed II is a better game than its forebear and is a beautiful and memorable experience on its own terms. But it's more than just a game--it's an escape to a place and a time that feel so welcoming, you'll be making return trips even after your initial adventure is over." (9/10) - GameSpot

PLEASE NOTE: Laptop and integrated versions of GPU cards may work but are NOT supported.

March On Rome + Bring Down The Templars' Reign Of Power

Disclaimer: To access and download these games, you must first download the Mac Game Store client onto your Mac. Upon purchase, your redemption instructions will explain this (very simple) process.

Immediately following the conclusion of the events in Assassin's Creed II, Ezio, in his enduring struggle against the powerful Templar Order, must journey into Rome – center of power, greed, and corruption – to strike at the heart of the enemy. Defeating the corrupt tyrants requires not only strength, but leadership, as you will now command an entire Brotherhood of Assassins to defeat your mortal enemies. And for the first time, an award-winning multiplayer layer allows you to choose from a wide range of unique characters, each with their own signature weapons and assassination techniques, and match your skills against other players from around the world. Assassin's Creed Brotherhood Deluxe Edition Includes:

WHY WE LOVE IT

From extra maps, to nerve-racking multiplayer games (including assassinate or be assassinated-style matches), to bonus content like saving Leonardo Da Vinci from kidnappers, there's a ton to do in this Assassin's Creed installment, and obviously it still has the same incredible graphics and free-flowing gameplay you know and love. TOP FEATURES BONUS CONTENT

*Metacritic Score: 89/100* "That said, Brotherhood really looks the part, with a step up in the graphics department... and a massive and varied city to explore. It also introduces an innovative multiplayer suite, for which the team(s) should be applauded." (8/10) - IGN "... few games make it such a pleasure to simply move from place to place, whether you are galloping on horseback, soaring through the sky from rooftop to rooftop, or diving into a bale of hay from hundreds of feet above. Like Ezio himself, Assassin's Creed: Brotherhood['s]... charms are almost impossible to resist." (8.5/10) - GameSpot

PLEASE NOTE: Laptop and integrated versions of GPU cards may work but are NOT supported.

View similar items
Take 10% Off
Your First Purchase
Join millions of other subscribers who get exclusive discounts, freebies and giveaways!
Coupon code will be sent to this email address
By joining our mailing list you agree to our Terms and Conditions
No thanks, I'll just pay full price.
You're in!
Check your inbox for your 10% coupon